WHAT HAS SPACE GIVEN US? 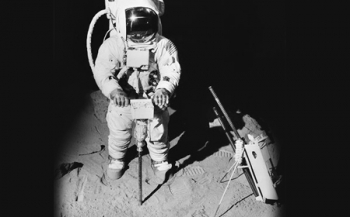 Men on the moon and robotic carts on Mars are far away from us, but space exploration has a significant impact on our daily lives. Or as NASA says, "space is everywhere you look." The space agency, is happy to show us the utensils that we use in our daily lives due to expensive space missions on the website.

Let´s start with the high-tech gadget that was developed for the moon landings and is now to be found in every back shed: the cordless drill. Originally it was developed for astronauts, to be able to do research on the lunar surface without having to worry about the length of the cord, but Black and Decker spotted a gap on the earthly market for it.

The wireless headset is inspired by the technology that allowed Neil Armstrong to communicate with the flight controllers in Houston. Since the 60´s the better headphones were still developed in the aerospace industry, which ultimately led to the wireless headphones that we use for our mobile phones.

Space is even reflected in our clothing. The Nike Air sneakers with air in their soles, owe this idea to space suits, which also have low air cushions under the outer layer . A smart NASA engineer introduced the design in 1979 at the shoe manufacturer .

In the air and on the streets
The blessings of space explorations are also noticeable outside. It is logical to think of aviation. Technology from space has ensured that less airplanes crash on objects. Psychological testing for astronauts also appear to work fine for pilots.

Furthermore, the technical developments from NASA also had an impact on cars. So NASA contributed to certain developments on the chassis for busses, the safety analysis of cars, but also to air conditioners in cars.

Space is even reflected in the supermarket. The astronauts took freeze-dried food with them on their space missions. This technique has also caused that our prepackaged food stays fresh for a longer period of time. Research into astronaut food also contributed to the development of nutritious milk for babies.

Not from space
NASA also paid attention to nonsense stories that exist on space inventions; Teflon, velcro and Tang orange drink, we do not owe to them.

Teflon, the non-stick coating which became so famous thanks to Tefal, was accidentally invented in 1938 , right here on earth. Later it was used in the Manhattan Project to create atomic bombs. NASA made ​​good use of the material on heat shields. That´s how the wrong perception appeared.

Also velcro is so often used by astronauts that it seems as NASA had invented it. The Apollo capsules were filled with pieces of velcro , so tools was not going to fly in weightlessness circumstances. Confirmed however, it was invented during World War II by a Swiss man who saw how seeds hung on the fur of his dog.

Tang finally, the orange drink was not invented by NASA , but has to thank its presence to the astronauts. Sales of Tang did not really get off the ground until it was used during the NASA space flights.

With commercials, the manufacturer of Tang, played handy on the popularity of the astronauts and managed to get the brand succesfully related with the space program.